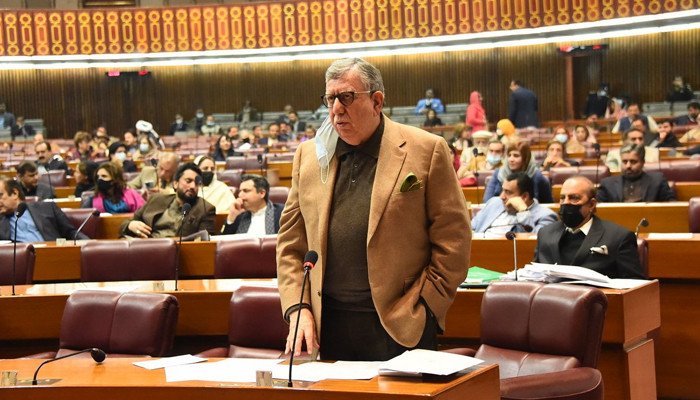 ISLAMABAD: The Senate on Friday handed the SBP Act, 1956 [The State Bank of Pakistan (Amendment) Bill 2022 after clause-by-clause reading with majority vote amid opposition’s noisy protest. The bill, tabled by Minister for Finance and Revenue Shaukat Fayaz Ahmed Train, was passed through the vote count.

The bill sailed through a majority vote of 43 against 42. Earlier, the motion on the bill was passed with a tie-breaking vote of Chairman Muhammad Sadiq Sanjrani as both treasury and opposition benches’ votes were 43 each.

The bill, already passed by the National Assembly on January 13, 2022, was aimed at providing for the constitution of the SBP to achieve domestic price stability by regulating the monetary and credit system of Pakistan and, without prejudice to this primary objective.

The bill proposes to contribute to the stability of the financial system of Pakistan and support the general economic policies of the Federal Government to foster development and fuller utilization of the country’s productive resources.

It authorizes the bank to have the power to acquire, hold and dispose of movable and immovable property of any kind, to enter into contracts and to undertake all activities necessary for the achievement of its objectives.

It suggests that the Governor and the non-executive Directors shall be appointed by the President, upon the recommendation of the federal government.

The Deputy Governors shall be appointed by the Federal Government after consultation between the Minister for Finance and the Governor, from a panel of three candidates recommended by the Governor of each vacant position, in order of merit.

The amendments propose to exclude provisions related to the government borrowing as well the quasi-fiscal operations of the State Bank. The State Bank will, however, continue to extend refinance facilities to financial institutions with appropriate checks and balances.

It also allows the SBP to be sufficiently capitalized and prescribes the necessary mechanism to achieve the desired level of capital over time, through both statutory reserves as well as retained earnings.

Earlier, the House also passed the National Metrology Institute of Pakistan Bill-2022 unanimously, which was presented by Minister for Science and Technology Syed Shibli Faraz.